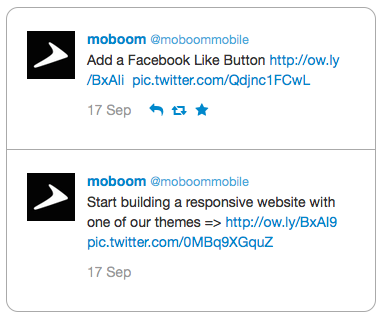 All templates are free to try: Both free and premium. You never pay until you’re ready to publish your site.

Start with this template ~ Already purchased

This widget is meant for designers and developers who want a custom display of a twitter feed. It comes with a few designs, which are intended to hint at (rather than fulfill) the potential of the widget.

To use this widget, you'll need a widget ID, which you get from Twitter. (Details here.)

The three included styles (clean, minimal, speech) are all defined in the LESS code, in the Advanced Styles window. You can adjust these as needed, or build your own custom style.

Additionally, you can install a JavaScript callback function, which will be called for each tweet. The function should be installed globally on the window object. It takes one string as input (the text of a single tweet, already formatted with HTML tags), and should return the modified text. For example:

This widget does not provide a way for you to install JavaScript. You will have to either build your own custom widget, or use the JS Include widget.

Category: None
Updated: 01 January 1970
Dependencies: The following widgets will be installed with this theme. They are included in the purchase price:
Industry: /website-templates?tag=

Submit your templates, widgets, content, integrations, or services to the Market, and get paid for the value you create.